Radio blaring with Christmas music accompanied by my squeaky voice singing along at the top of my lungs, this sunny early morning ( December 3 ) found me driving down Brock Road to Highway 407.  Today was my appointment with the orthopaedic surgeon about my troublesome knee.  My destination - just around the corner from Markham Souffville Hospital. Estimated travelling time - thirty minutes. Never one to be late, I gave myself an hour......thankfully!

At the best of times I dislike driving Brock Road with its plethora of gravel trucks travelling at excessive speeds, like menacing giant bullies, tailgating all the way! ( I won't go there now; that's a blog on its own.) I usually head out of Uxbridge along Highway 8 to the Aurora Sideroad. After years in York Region, I know those roads and concessions well; they were my real estate stomping ground. Today, however, that route made no sense.

Within five kilometres of the 407, traffic ground to a dead stop. Red taillights were visible for as far as the eye could see. Damn! A few cars began to turn around and head back north. The construction truck in front of me turned.  As he passed me now moving in the opposite direction, I waved. He stopped. With both of our windows rolled down, I asked, "Accident?" "Big", was his response.

I may as well have been on Mars so unfamiliar am I with these roads. If I turned, my ornery GPS would just attempt to redirect me south on Brock again. "Now where?" I thought. Perhaps it was the look on my face, for he asked where I was headed. To keep it simple, I responded with, "Markham Stoufville Hospital."

"I'm headed in that general direction. I'll get you started. Follow me."

Turning left off Brock Road almost immediately, we headed down an unpaved rural road, deeply rutted with frozen mud mounds. Thank god for a good suspension!  Zigzagging along a myriad of no-name concessions, past old farmhouses, my GPS reproachfully squawked with a series of "recalculating" announcements. It did cross my mind that I was following a total stranger down lonely roads. However, in my rear view mirror, I could see  a virtual conga line of traffic following.  And so, I continued to follow my Pied Piper.

Flashing lights on his truck indicated that I should pull over. Like the good little lost soul I was, I obeyed. As I lowered my window, he indicated, "Turn left up here at the 9th Line. Follow it to the 17th. Take the 17th until you reconnect with the 9th. Then left on the 9th to the Hospital."  Honestly, at the mention of the 9th Line, I smiled.  I was back in known territory. Nolonger lost!

"I cannot thank you enough", I managed to say before he smiled graciously,  waved with his gloved hand, hopped into his truck and drove off.

"Well, he just made my day," I thought. Not because I would arrive at my appointment on time, but because I had just experienced a genuine act human kindness, a good deed.  Thank you, kind sir. Now, of course, it is my turn to find the opportunity to play it forward. 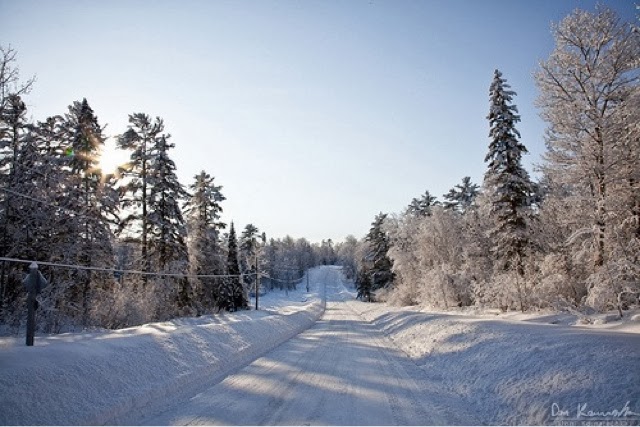