A staggering 115,000 people per day with destinations to the sunny south or famous ski resorts are expected to pass through Pearson from this Friday to Sunday.  Visions of sparkling seascapes, luxurious pools and resorts, Mickey Mouse and his pals, or stunning snow-covered mountain vistas occupy their thoughts. Amongst that throng of excited travellers will be my sister.  Indeed, Jo-Anne is also headed to the sunny south.  Flying American Airlines, she will jet into Tegucigalpa, Honduras.

Sounds exotic, doesn't it?  Exotic until one reads the U.S. or Canadian Travel Avisories which state that travellers should exercise a high degree of caution due to violent crime.  Honduras holds the dubious distinction of having the highest murder rate of any nation in the world.  In general, no one in Honduras will intervene during a crime for fear of reprisal. Carrying anything of value makes one a target for crime. Tegucigalpa ( referred to locally as Tegus) is the Honduran capital known as a city of urban sprawl gone amok.  Unbelievably, it is into the slums of Tegucigalpa that Jo-Anne is headed.
Lovely in appearance on her exterior, my sister, Jo-Anne, exudes even more beauty from within.  She, quite frankly, is the kindest, most caring human being I personally know. Jo-Anne is a physiotherapist by profession; to observe her gentle ministrations to the elderly is to reduce one to tears.  If I were asked to name a truly "good" person, my sister's name would be the first to come to mind.  Not satisfied to sit idle during her retirement or to allow donations to Kiva and Plan Canada salve her social conscience, she applied for and received permission to work with a group assisting in the slums of Tegucigalpa.
And so on Saturday it is into a different world she will journey.  A world where medical care, dental hygiene and cleanliness do not exist.  A world where most homes are one room shacks constructed of wooden posts and scrap metal.  A world where North American style home refrigerators, stoves and sinks are unheard of.  A world where running water can be blocks away.  A world where many youth spend their days getting high by sniffing glue. 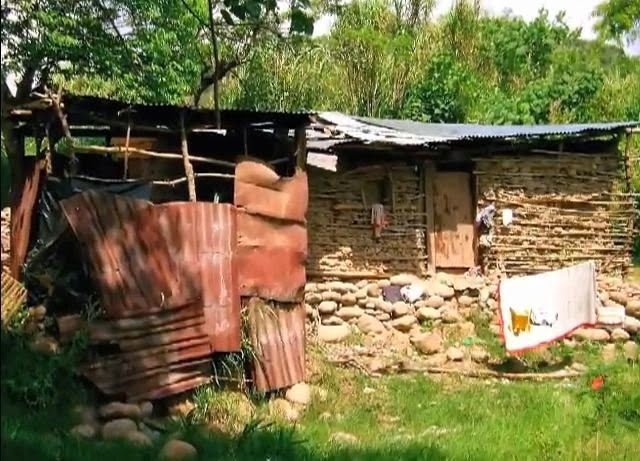 Jo-Anne and the crew will work the this home ( shown below) which currently houses a family of six.  They will attempt to both enlarge it and secure it against Mother Nature's capricious elements.  I am again reminded of Diane Steumers, A pebble can start an avalanche. 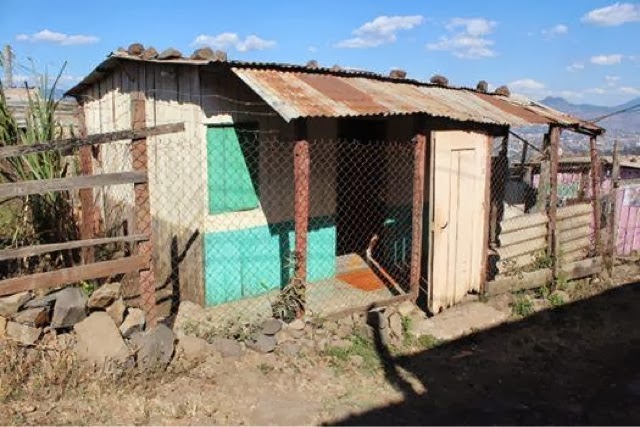 I cannot begin to imagine what emotions will be stirred in my sister.  I do know that they will be complex. I just pray that she remains safe and that she knows how inspiring are her actions.  I love you, Jo!  You are my hero.
Posted by Daphne Lockett at 06:38