My Mother's conversation rule was always, Never discuss politics or religion; Keep the peace, her entertaining mantra. If you are looking down, Mom, I am so sorry but a cancerous growing practice in Canadian politics is getting under my skin.......bigtime! I can no longer keep my big, opinionated mouth shut. To my Conservative Party-supporting friends, in an effort to maintain our friendships, I am warning that you may not wish to read any further.
Is anyone sick to death of the Just Not Ready ad running again and again and again and.......? Where is that 'mute' button? What happened to the fair play and decency once characteristic of Canadian political ads? I despair that the malicious muckraking ads of the U.S. have over past elections and now in this one, taken permanent root. Our politicians speak from one side of their mouth of taking the high road, comparing policies and track records, and then immediately resort to smear campaigns, with ads based on out-of-context words and fear mongering. 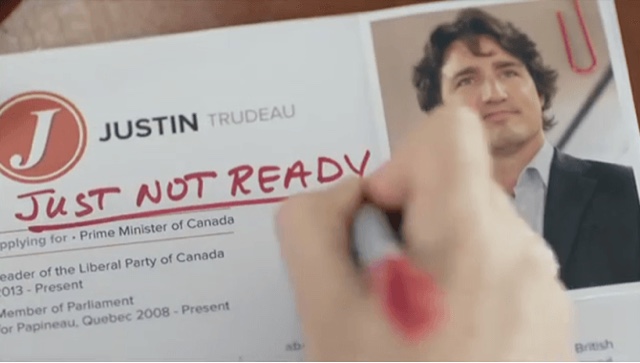 Fully aware that their Just Not Ready crusade is based upon misleading statements and innuendo, the Conservatives have cynically opted to muddy an opponent's reputation. Since when, in a decent society, does the end justify any means?
I guess pension splitting for seniors is next. The Liberal platform does not, and never has, included cancelling income splitting for seniors. Pure unsubstantiated scare tactics!
Well, he wants to send winter jackets to Syria. Yes, Trudeau has supported the already existing Canadian Government assistance program involving support to help refugees and displaced citizens survive the winter.
Didn't he say budgets balance themselves? are words taken out of context from a Trudeau speech made in Quebec in which Trudeau discussed accepted economic tenets. Oh, and do you get the impression from this that the Conservatives have balanced our budget? You need to investigate further if you believe that smoke and mirrors act.
Of late, the revised Just Not Ready ad has alluded to concerns that to allow anyone but the almighty Conservatives to handle our economy would lead to a Greek-like debt crisis. At this point, I must restrain myself from throwing a brick at our TV screen. The acme of cynicism has now been reached. Nothing, absolutely nothing, in our Canadian economic landscape can be compared to Greece's long history of obscenely generous pensions and national income tax evading psyche and the Conservative party knows it.
Why am I so upset? I do not presume to tell you who to vote for. Should you not wish to vote for a particular political party or its leader, that is your sacred democratic right! But please ensure that your decision is based upon the comparison of policies or track records or the handling of issues important to you. Do not allow your vote to be based upon public perceptions shaped by misleading statements or unsubstantiated and disparaging innuendo. What of the naive voter who reads little, but allows such attack ads to form their opinions? When did we Canadians give a free pass to our politicians, to mudsling, unjustly harming the reputation of opponents who feel called upon to honourably serve their country by running for office?
I dream of an election in which our politicians only advertise and promote their policies, track records and dreams for our incredible country, Canada. Let me decide based upon facts. Refrain from attack ads and you will have my vote!
Posted by Daphne Lockett at 11:00