Cold, chilly ocean winds buffeted our bodies. A gray sky sombrely accented forbiddingly dark forests and ragged sinister cliffs as they cut into the sea. Before Jim and I lay the desolate buildings of a tiny cod fishing outport. I involuntarily shuddered as the stark reality of 1800's outport life and the Herculean struggle to survive struck me. 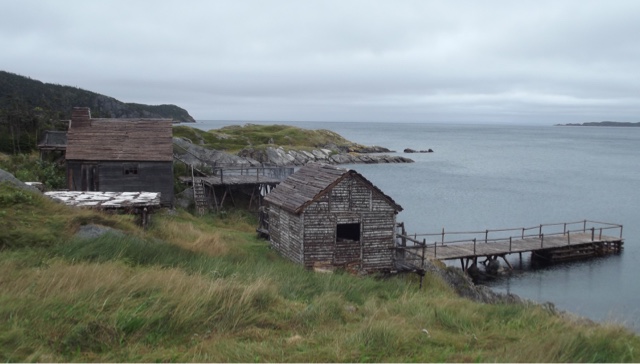 Come spring, village men and boys would venture into the frigid, often gale-tossed sea to fish for cod. Death by drowning in the icy unforgiving Atlantic was an ever present danger. Once ashore, all village hands, women and children alike, would be required to gut and split the fish, soak the cod and then lay them on flakes to dry. Once dry, the cod would be salted again and packed in barrels for shipment to Europe and the Caribbean. Day in and day out for over five months, their backbreaking work would continue. No weekends or long weekends, no respite. A small number of cod were retained for winter use by the villagers, but the bulk was traded for goods required for survival - tools, flour, and sugar. The greater the catch, the greater the chance of surviving the dark long winters. And surviving those Newfoundland winters was not a given. 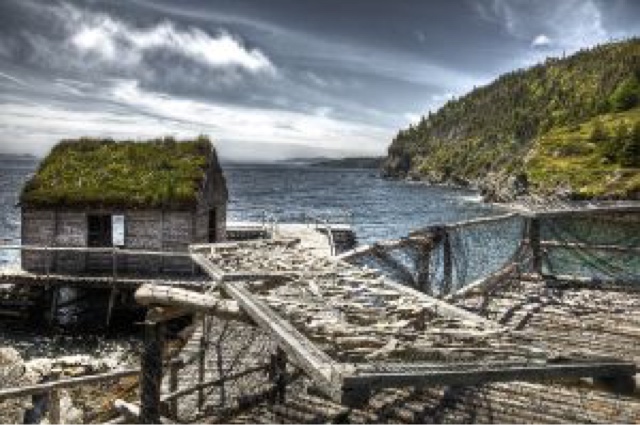 Our guide showed us the log construction of the homes and the spaces chinked with sphagnum moss which, in high winds, dried and blew away. She spoke of how the men would haul, trudging from long distances in deep snow, evergreen trees for stacking against shed walls in a desperate attempt to block out the cold, of beds in the morning covered with a thin layer of powdered snow that had drifted in between the cracks. I shuddered to imagine the existence. Small wonder, many settlers and their families, after burning even the wood floors of their cabins as a last resort, were found frozen to death in early spring. 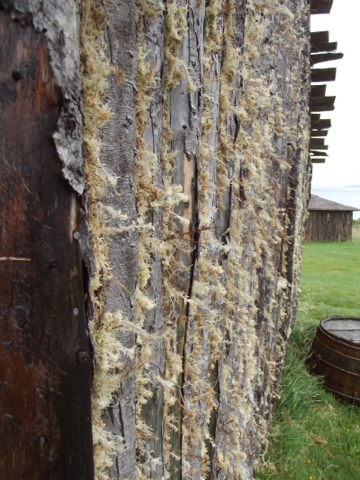 But if cod was king, it was the seal that made it possible for outport populations to remain. Cod fishing was the primary activity in summer and early fall, but near the end of a brutal winter, provisions were frequently scarce and survival tentative. Spring's seal hunt rounded out the year providing invaluable meat, fat and skins for warming outerwear.
A visit to Elliston on the Bonavista Penninsula reminded me again of the tenuous existence of Newfoundland's outport settlers. Here a monument has been raised in honour of 251 sealers who died in two separate but simultaneous disasters. So many lost, so young. 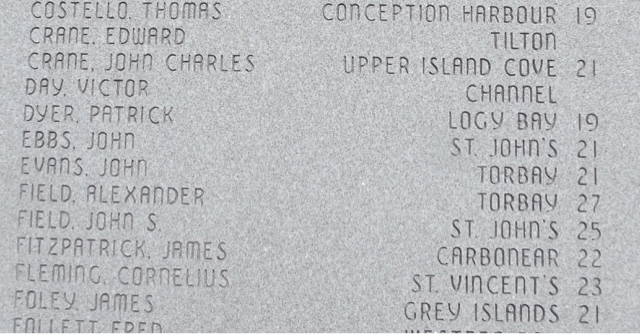 Imagine being dropped by your ship onto an ice flow with little food, no shelter and dressed in clothing ill-suited for sudden squalls. Imagine then being stranded, unable to find your ship in blinding blizzard conditions, freezing to death.
Most moving is the statue that has been erected. I am quoting from the descriptive sign located beside the monument:
At age 16, Albert John Crewe of Elliston couldn't wait to go sealing. It was the last thing his mother, Mary, wanted. Her husband, Ruben, had already survived the S.S. Greenland sealing disaster. Mary was insistent that he not go sealing again.
But Albert John was determined to go. And, to protect him, Ruben went too. Like many women in Newfoundland with sons, husbands, brothers and fathers sealing, Mary did what she could. She helped them prepare. She waited and prayed for their safe return.
On March 3, 1914, Mary woke to a vision that confirmed her worst fears. As depicted in this sculpture, Albert John had died in Ruben's arms on the ice, the father protecting his son until they both perished. 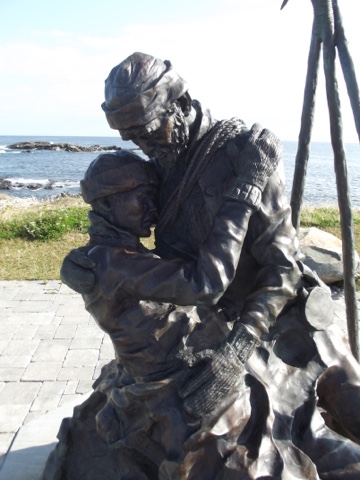 I bowed my head, overcome with emotion and attempted to imagine surviving the hardships of these early settlers to Newfoundland. I am in awe of their bravery and spirit.
A few days later, wine glass in hand, enjoying Christopher's company in the warmth of his living room and discussing these two sites, I wondered out loud, We have Victoria Day. We celebrate Labour Day. In Ontario, we even have Family Day. Why not a day to honour the settlers who forged a life in our country from Newfoundland to B.C. to the Northwest Territories? Newfoundland has poignantly reminded me that our settlers' bravery, ingenuity, struggle and ability to survive the hardships of their new world forms the base of our nation today.
Oh Canada, we need to honour our heroic predecessors and to be reminded from whence we come. Canadian Settlers' Day. How appropriate would that be?
Posted by Daphne Lockett at 04:55