Bustle, chatter and excitement swirl around us. Anticipation hangs in the air. The Arrivals and Departures boards flicker and change. Call me insane, but I truly love airports. Here we sit in the lounge at Pearson, awaiting our Air Canada flight to Zurich.
"What?" you ask. "Didn't you write at the end of your Italy blog that France was to be your next destination? Indeed I did. Until a minor (?) glitch last December, that was 'the' (er, should I say 'my') grand plan. But a December 2012 conversation began:
Moi: "Don't forget to remind me to make those France hotel and flight reservations first thing in January.
Pause. No immediate response was forthcoming. Hmmmm? Curious? I wondered if Jim had actually heard me when......
Jim: "I've been thinking that I would rather visit Switzerland and Austria."
Moi: Exhibiting my usual quick witted, razor sharp intelligence, I uttered, "Huh?"
Jim: "Just 'work up' the trip, Hon! We'll look at them both and then vote on it."
Moi: Hrmph! 'Hon', indeed! Instantly my advanced mathematical mind whizzed through calculations. One plus one is two. Bewildered, I asked, "Vote? But there are only two of us!"
Close friends and family, albeit eyes rolling and heads shaking, understand two things about me. Number 1 - I love to travel. Number 2 - I love, equally as much, the anticipation and planning of our trips. No bus tours! DIY all the way! Sights, planes, trains, boats, cars, hotels, local guides, audio tours, I immerse myself in researching them all. Books and the internet are scoured, highlighters squeak, pencils scratch, a rainbow of multi-coloured stickums attach everywhere, printer paper flies, hotels are cross checked on Venere and Trip Advisor, maps are consulted and distances calculated. Itinerary in hand, I surface about three months later.
Moi: Face red, eyes bulging, I oh so sweetly sought clarification, not quite believing what I had heard, "Just 'work it up'......Hon?"
But hey, my Mr. Lockett is no dummy. He is fully aware that he married (for better or worse, poor guy) a travel junkie. Have passport, will travel. I will go anywhere. Thus, this flight to Zurich. Yup! I just 'worked it up'. And so we are off to Switzerland, Austria, Germany (Bavaria) and....I negotiated four days in bella Italia at Lake Como - Hon's fee extracted for 'just working it up' again, of course!
I refer to this as our '2013 Alps, Lakes and Rivers Tour'. Jim laughingly calls it our '2013 Beer, Sausage, Cheese, Chocolate, Pasta and Wine Tour'. Did he just cover all of the food groups?? What is that line about the way to a man's heart is through his stomach?
As usual, I will try to keep in touch daily, the operative word being "try". Until tomorrow.....jusqu'a demain, bis morgen, a domani! (From a language standpoint, this should be some linguistic adventure or, for unilingual me, a confused hell!) 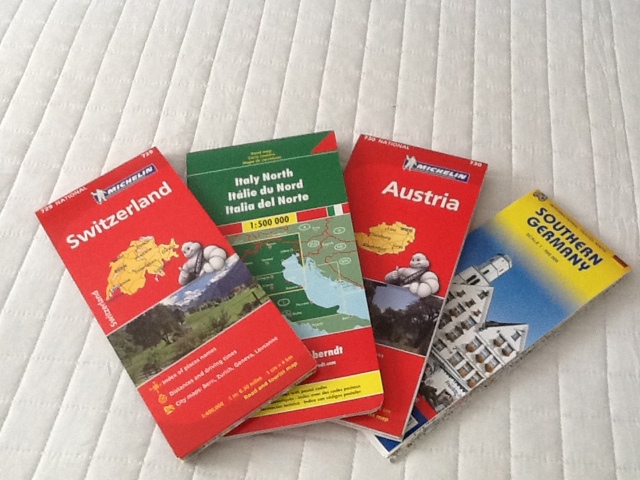