Bezu (Policeman): Did you approve? (about the Louvre Pyramid)
Robert Langdon: Yes, your pyramid is magnificent.
Bezu: (Grunt!) A scar on the face of Paris.
.....The Da Vinci Code, Dan Brown
Before we journeyed to France, I admit to being the typical tourist.  Two iconic landmarks dominated my "must see" list - the Eiffel Tower and the Musee Louvre. They did not disappoint. Dramatic during the day, both structures become positively magical at nighttime. A staggering 16.7 ( 2012 ) million visit the Eiffel Tower and Louvre on an annual basis, yet both of these landmarks were initially criticized and disliked, even unwanted, by Parisians.

Built by Gustav Eiffel in 1889, the Eiffel Tower was erected for the Exposition Universalle ( a celebration of the 100th anniversary of the revolution ). Although a huge success at the Exposition, the structure came under virulent criticism from the leading French artists and intellectuals of the time; it was not in keeping with architecture of the belle epoch. So much negative pressure was brought to bear, that the magistrates of Paris withdrew funding forcing Eiffel to complete his structure using personal resources. Deconstruction of the tower was contractually scheduled for twenty years after its opening.  Eiffel, desperate to keep his tower in place, was ultimately able to convince the French Government of the value of the tower for military radio communications. Et voila, the Eiffel Tower remained standing and a global cultural icon, attracting 7 million visitors a year, was born. Can you imagine Paris without the Eiffel Tower? I can't!
Totally unpreprepared for the beauty of the Eiffel Tower, Jim and I audibly gasped as we rounded the corner and the structure came into view. There it suddenly was, soaring an impressive 81 stories, its iron lattice work actually appearing too delicate to support its own weight. 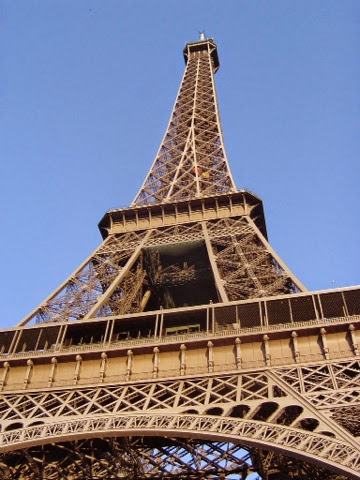 And after dusk, a lit Eiffel Tower becomes positively magical.  As if drawn by some magnetic force, crowds gather to witness the spectacle and are doubly wowed when every hour on the hour the tower's sparkling light show of strobes pierces the dark Parisian skies. C'est magnifique. 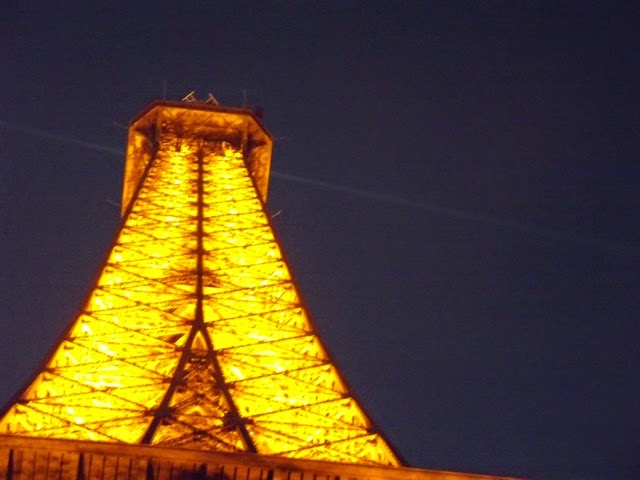 What I would never have anticipated in a million years was my instant love affair with the Louvre.  So overpowering is this attraction, that I would return to Paris tomorrow just to revisit the Musee Louvre.  Anyone game?

Opened in 1793, the Louvre Palace, now one of the world's largest museums, attracted 9.7 million visitors in 2012, making it the most visited attraction in Paris.  Over 400,000 objects from pre-history to the 21st century are housed in over 632,300 square feet.  To name just a few, it is home to Mona Lisa, Venus de Milo, Winged Victory of Samothrace and paintings of the greatest artists from the Renaissance to the Romantics. To my Facebook picture postings of the Louvre, Faye responded with, I could spend six weeks in the Louvre alone.  That is no exaggeration, Faye!  Jim and I lovingly joked that when my sister, Jo-Anne, a true fine art student and lover, visits the Louvre, she may never emerge.
Gracious wide marble stairways lead to spacious wings offering a multitude of well organized and marked exhibits. Skylights bathe priceless paintings in natural light.  The interior is nothing short of magnificent. But it was entrance courtyard with its large glass pyramid surrounded by three smaller pyramids that stole my heart. I am incapable of explaining why; I just wanted 'to be there'.
Entrance issues led to the construction of architect, I. M. Pei's, glass pyramid entrance in 1989. The larger of the pyramids provides a stunning modern central entrance to the various wings of the museum.  Dramatic and light-filled, I love the intriguing juxtaposition of modern glass to aged marble and historic architecture. For me, it is our future offering entrance to our past.  C'est brilliante. 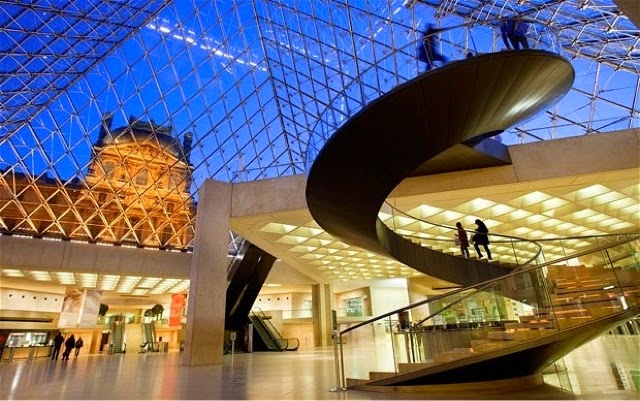 To this day, the Louvre's pyramids remain highly controversial.  A whole school of thought view the futuristic edifice as out of place, a scar on the face of Paris.  But the Louvre pyramids hold a charismatic draw on their own.  Crowds gather in the courtyard, meeting friends, snapping photos, peering into the mysteries revealed below or just sitting on the concrete benches taking in the historic surroundings. And at night? Well, let me just say that the Louvre is not outshone by her Rive Gauche competitor. 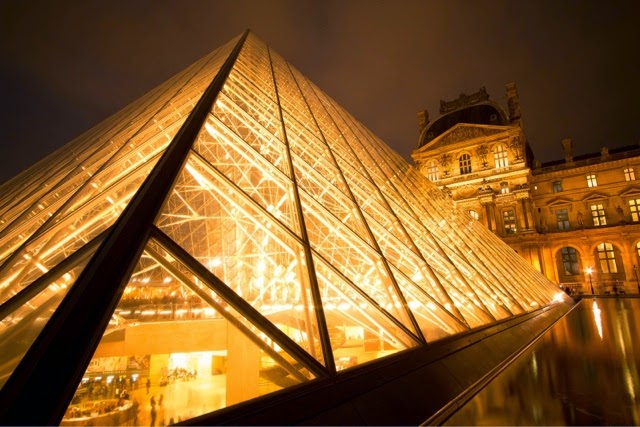 How ironic, I now muse, that two of France's iconic landmarks have historically been so strongly derided and unwanted, whether in total or in part.  Somewhere in here is a lesson.  Perhaps it is as simple as opening our thinking and emotions to change.  Who knows where the next ironic iconic may be.
Posted by Daphne Lockett at 03:13