As most Americans and Canadians experienced yesterday, my heart sank; I felt sheer horror at reports of the tragic shootings in the Fort Lauderdale Airport. All I could initially think was, "Christmas vacation, families, children. Dear God!" 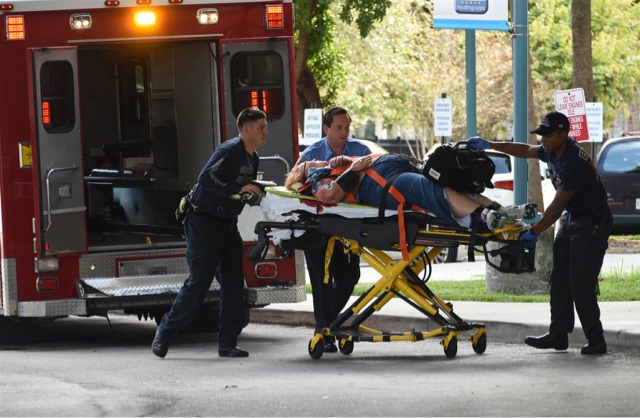 Over coffee this morning with more reports in, my mind now reels with unanswered questions.

What was the Security Official in Alaska thinking when he cleared the gunman to board that Delta flight? Santiago had only one checked bag, a handgun case with a pistol. Granted, the gun was declared, but who travels from Alaska to Florida with no warm weather clothes...only a gun? Wasn't the TSA official even slightly suspicious?

When will the American News stations, FOX and CNN, stop speculating and just report the facts? At one point FOX News reported that the gunman was a passenger on a Canadian flight. Two carriers use Terminal 2 at the Fort Lauderdale Airport - Air Canada and Delta. Of course, it had to be Air Canada. Right? Knowing FOX's love (ha!ha!) of Canada, how they must have taken glee in reporting that the gunman originated in Canada. I can only imagine the increased worry and fear that unsubstantiated report created in those whose families were journeying on Air Canada yesterday. I will never forget CNN's reporting of the 2005 Air France crash at Toronto's Pearson. With the Global TV feed showing the flaming jet carcus, Air France emblazoned on the side, CNN, Wolf Blitzer in fact, reported the crash of Lufthansa. What? They went on to interview an expert who "speculated" that no passengers could survive such a crash. Imagine the unnecessary horror of families with passengers aboard Air France following that broadcast. All aboard survived. Give me the boring CBC! What about security in the baggage claims areas of American airports? Direct access from outside is allowed into the claims areas. Tampa and Phoenix Sky Harbor Airports are prime examples. With such access, where is security?

Is the U.S. ever going to come to terms with their constitution's "right to bear arms"? Will they ever accept even moderate gun controls? Florida law permits guns inside airport terminals on the condition that they are still in their case. That said, there is a bill before the Florida state legislature to allow guns in public places like airports. Are you kidding me? How many more mass shootings will the U.S. suffer before they get it? Social media yesterday was initially dominated with "Trump will stop this" statements. How will he stop it? I need to understand how when this President-elect viamently campaigned against gun control.

Yesterday, as initial reports came in, I asked Jim how some one could have a gun in the Baggage Claims area of an airport. His answer? "It's the States." 'Nuff said.