Cold, dark and rain were our welcome to Vienna last night as we disembarked our eight hour train ride from Zurich. Exhausted, we signed in at our hotel, immediately crawled under eiderdowns and fell blissfully asleep. What a wonderful discovery it was, upon opening our drapes this morning, to find massive gothic St. Stephen's immediately across the platz from our hotel. This cathedral is considered by many to be the heart of Vienna, although some would argue for the Opera House or Hofburg Palace.
Skies were dull and temperatures distinctly chilly, but the torrential downpour of last night had dissipated. Thank heavens for the heavier coat I packed for our mountain top adventures. Wishing to walk for a day and stretch our train-strained legs, we followed good old Rick Steve's "Vienna City Walk", taking in the primary sites, absorbing the atmosphere and pace of this vibrant classic city, peaking in chandeliered cafes offering scrumptious delicacies, and deciding which sites we will concentrate on for the next three days. Traffic free cobblestoned streets make it clear - this is a city for the people.
Fountains and sculptures are in themselves storytellers and Vienna has no shortage. I was reminded that as beautiful as Vienna is, her past has been a difficult and scarred one. One monument in particular -The Monument Against War and Fascism - moved me to tears. The monument consists of four thought provoking and heart breaking statues meant to remind Austrians of the consequences of not keeping their government on track. The first section with two white slabs of granite is cut from the infamous quarry at Mauthausen. Moving towards these slabs symbolizes standing at the gates of a concentration camp. Carved into the granite monoliths are chilling wartime images such as chained labourers and gas masks. At the base of the monument is a low sculpture of a hunched over Jew forced to wash anti-Nazi graffiti off the street with a toothbrush. Citizens would stand over these workers jeering and spitting on them. So starkly moving is this piece that it reduced me to tears. Behind is the 1945 declaration of Austria's second republic, the first having been annexed by the Nazis, with the human rights built into it actually carved in stone. The experience gains emotional impact when you realize that this monument stands in the spot where several hundred people were buried alive when the cellar they were hiding in was demolished in a World War II bombing.
This evening we ate at a local wine cellar, Gigerl Stadtheuriger. Music, good Austrian wine, and an assortment of inviting local foods, the names of which I had no comprehension, made for a great end to our first day in Vienna (Wien).
I am going to list what these photos contain as I have not described most of them in the written part of my blog:
1. The view of St. Stephen's from our hotel room.
2. Cafe Sacher. One of the delightful chandeliered cafes.
3. Cafe Sacher is famous for their Sacher Torte. Two forks please!
4. Concentration camp gates - Monument .against War and Fascism.
5. Carvings on the granite monoliths.
6. Hunched over figure of Jewish street cleaner.
7. Austrian Human Rights Code carved in granite.
8. Opera House, considered one of the world's premier opera houses. Note giant outdoor screen on which some performances are projected for the public.
9. Vienna's walk of famous opera stars, conductors and composers.
10. J.& L. Lobmeyr Crystal in business since 1823. Gorgeous crystal museum on the third floor.
11. Interior of Lobmeyr's. Chrystal chandelier in centre of store reminds me of a trilobite!
12. Holy TrinitynPlague Column erected by Leopold I to thenm god for sparing his city in the 1679 plague.
13. Lady Faith and Cupid toss an old naked lady, representing the plague, into the abyss thus aging the city. Mesh covering on statues is to keep the pigeons off!
14. St. Peter's Church - ornate organ
15. St. Peter's Church - cupola
16. Celebration at Hofburg Palace - a new ambassador's presentation of credentials to the Austrian President. Problem? We don't speak German so we don't know which country he represented.
17. Can you identify this new ambassador to Austria?
18. Hofburg Palace
19. Roman ruins outside the palace.
20. Jim and I - dinner at Gigerl Stadtheuriger
21. Interior of the charming little restaurant. 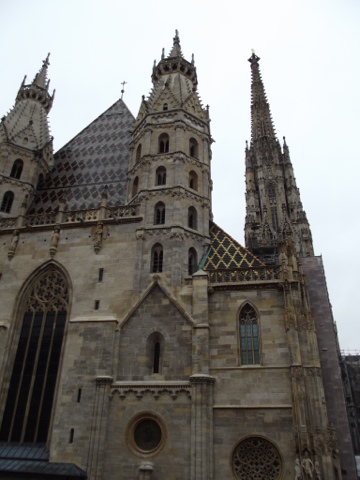 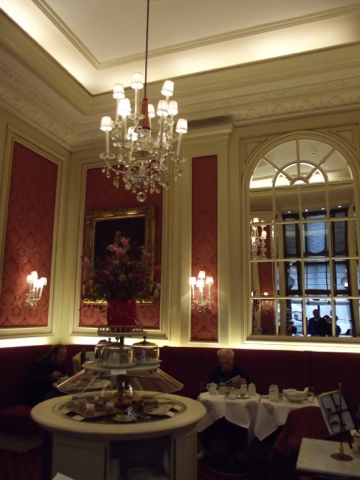 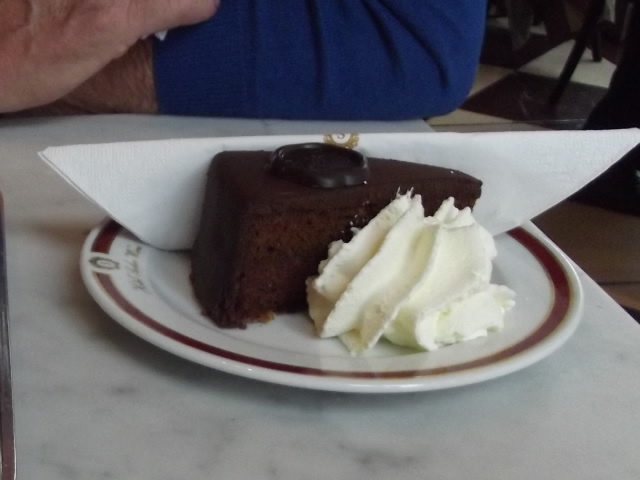 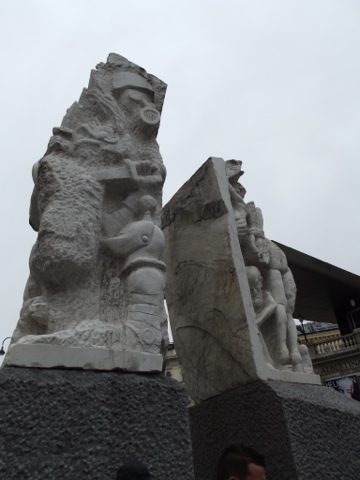 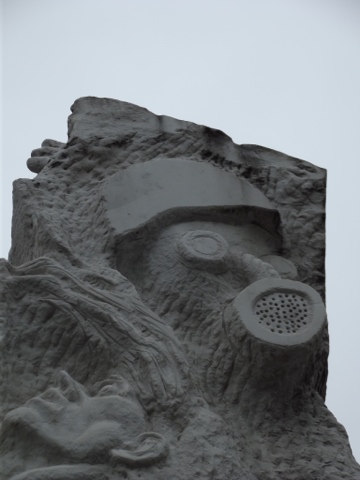 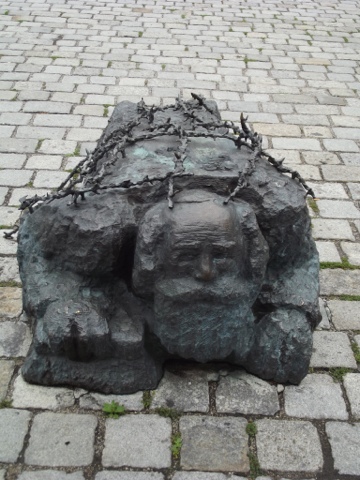 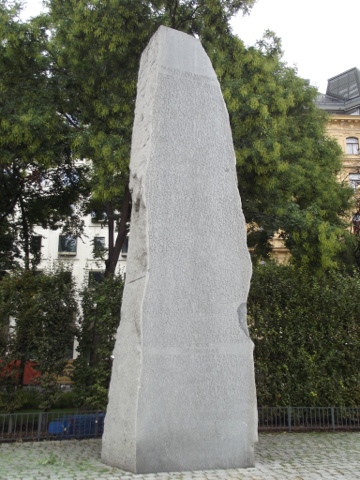 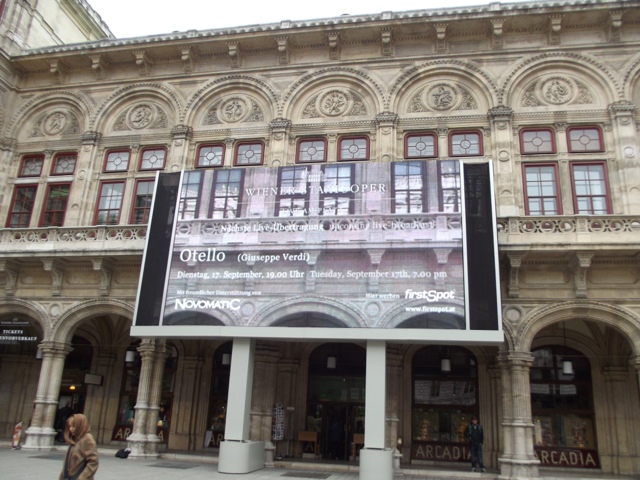 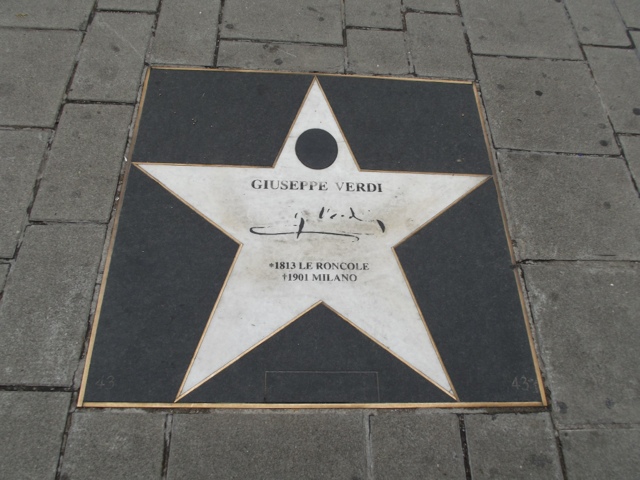 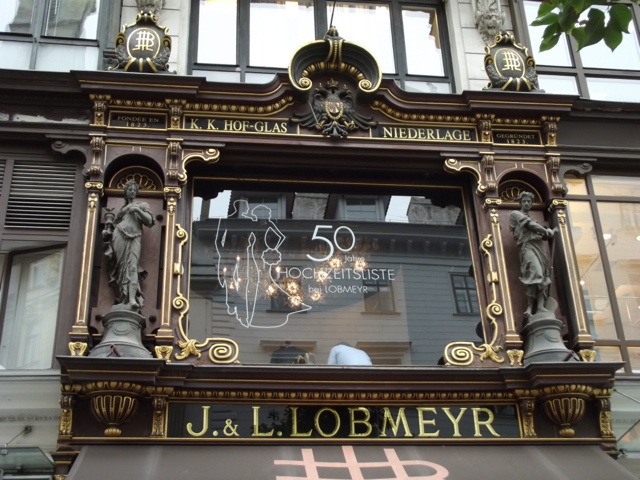 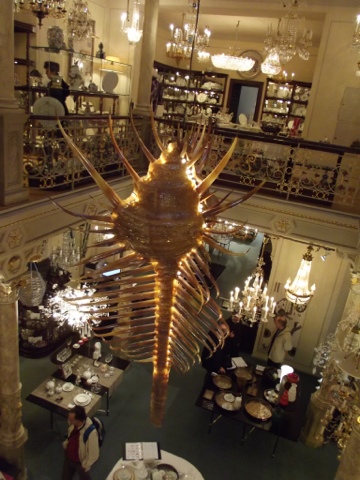 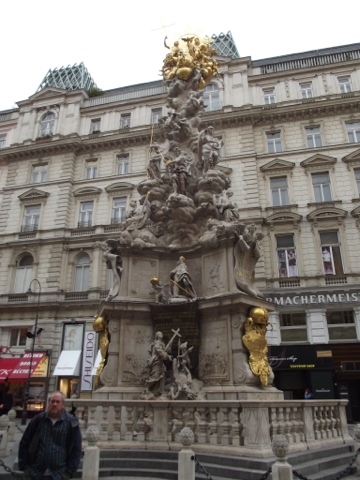 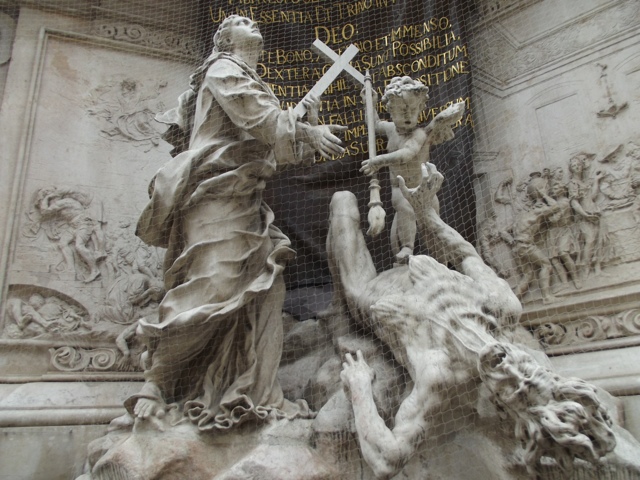 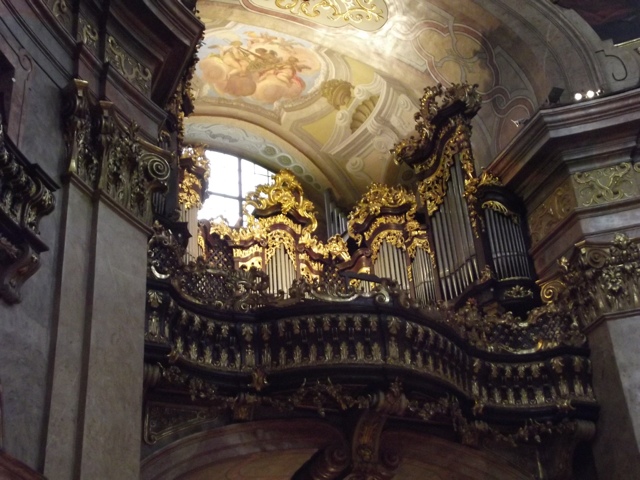 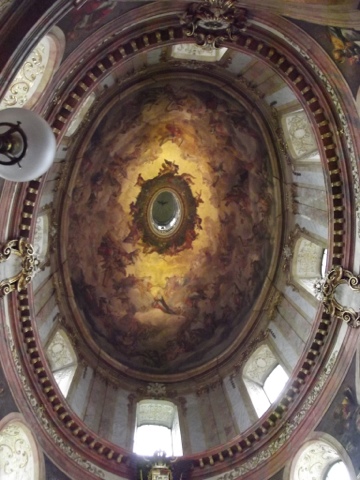 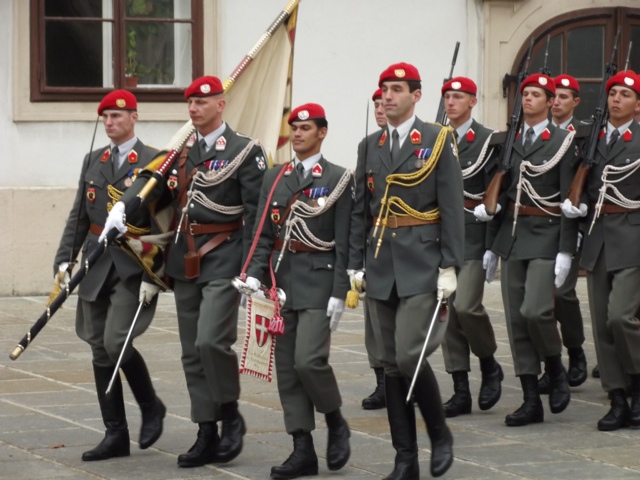 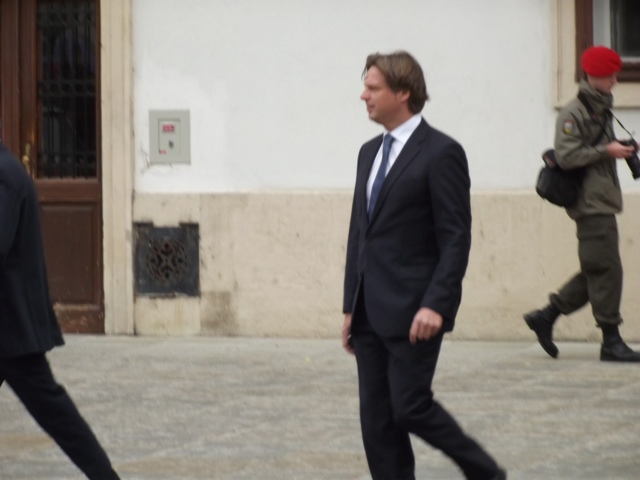 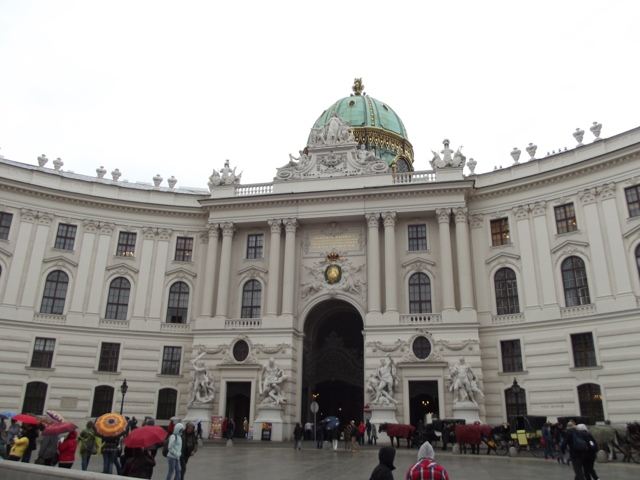 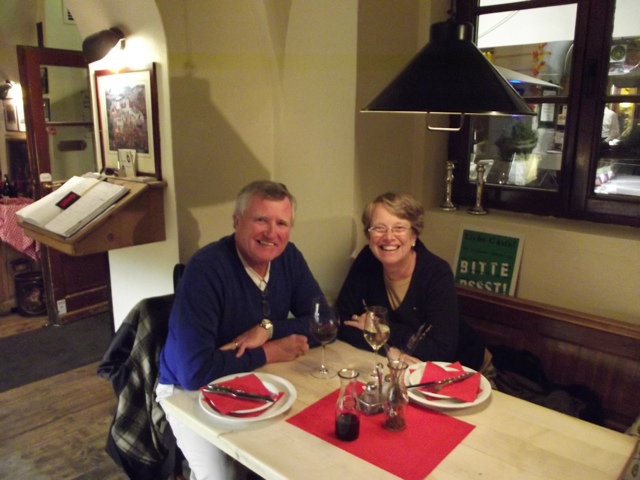 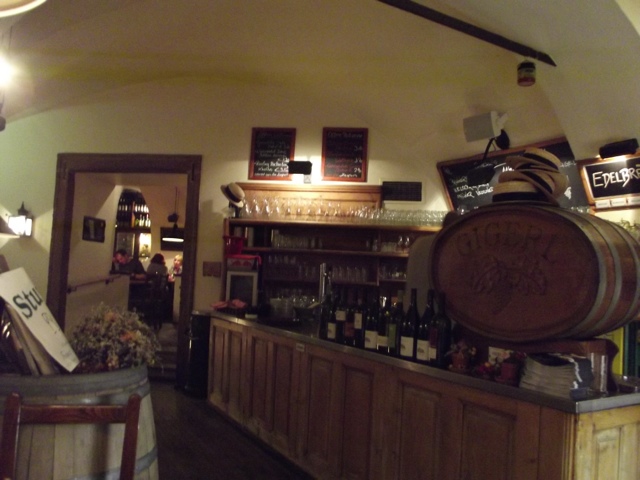